Good evening!   Well I finally have something to share.   I have just returned from a lovely weekend away scrapping with some lovely friends.  I managed to get eight layouts completed,  which is amazing... as mojo has been slightly lacking.  Although I am really wanting to stretch my creativity.  It's starting to feel like all my layouts are starting to look the same.  It's not that I don't like what I'm doing. .. it would just be nice to see a bit more variety. .. anyhow......
One layout l did complete was using the latest sketch over at Purple Pumpkin.  I've rotated the sketch and also flipped it, but have otherwise stuck to it fairly closely.  I have used the Scooby Doo button (for obvious reasons lol) and also the coordinated round.  These were perfect for my little fella, who is the biggest Scooby fan :-) 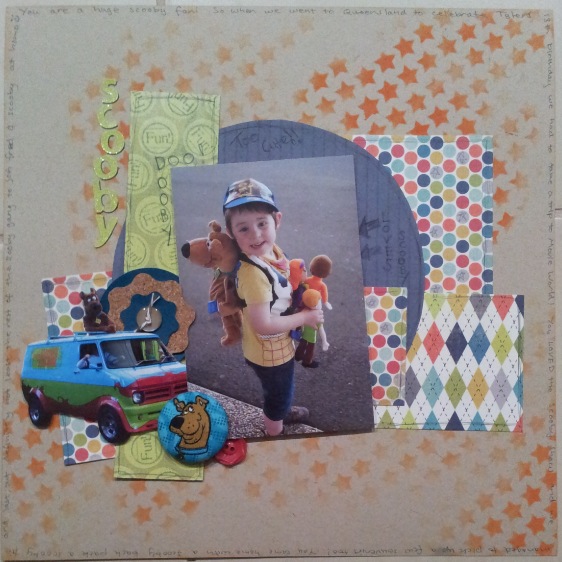 Look at my cutie pie!
Now... while I'm on the subject of Purple Pumpkin, I'm wondering... How do you store all your stuff???  I'm asking this because since returning from my weekend away I've decided my room is in serious need of some reorganisation.  It looks like a bomb site atm!!!  And NO, I am not posting a picture of it lol
Sooo... I thought now was the time to start since half my stuff was already 'out'.  First thing I decided to get into was my PP stash... which is rather large.  So it was all just stored in one of those gift boxes you get from the cheapy shops.  It was a rather large box, yet is was still bursting at the seems (everything was still in their packets).  So, I thought I might get all the buttons out and put them in a jar I had received from the retreat.  But I very quickly realised this jar would not be large enough.  Then I thought... a jar would be nice, but would not be very functional... so next I grabbed one of my drawer organiser things (everything in it tipped onto my desk... possibly not the smartest idea considering the huge mess already and it went totally against what I was aiming to achieve).  This was not very sturdy, but I thought it would do the job for now... I really am trying to cut back on spending... surely there are enough containers in my house to figure something out... right??? 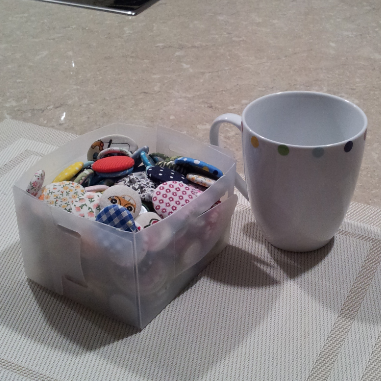 Sooo.... I tipped them all in this container and continued on... well by the end this container was also overflowing (the photo above was taken after I started reorganising again).  SOOO... I eventually came across one of those plastic container thingy-ma-jigs that have all the dividers in it.  It did contain some letters... that I had gotten when I VERY first started scrapping and hadn't looked at in like a billion years!!!  SO... they got put into the 'donate to kinder pizza box' and away I went sorting my buttons into categories.  Spots, patterns, animals, transport etcetera-etcetera-etcetera.  Once this was done, I was like, OH... the lid wasn't going to shut... BUT with a little tidying and even further sorting (hey may as well... I'd gone this far).......
TAA DAAAAAA!!!! 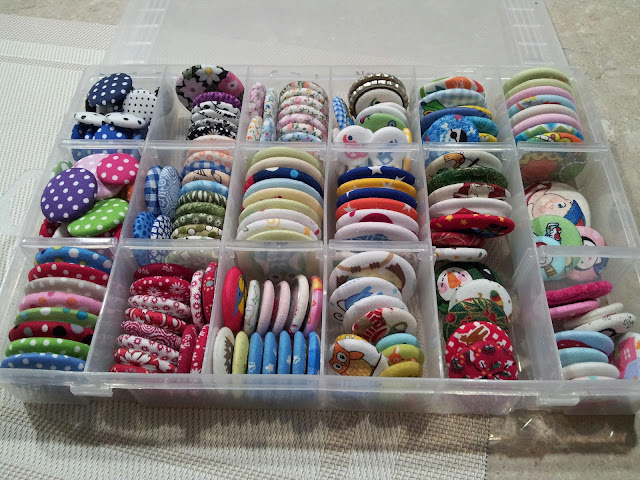 Now my PP buttons are beautifully organised!!!  When I'm scrapping these are always one of the first 'go to' embellishments, so I'm so happy they are now well organised... the only down side is that there isn't much room for many more though :-(  I'll just have to get scrapping hey!
OK, so that was a much longer post than what it was suppose to be, but I just had to share my little project for this evening.  Now to tackle the rest of the room... as Shaggy would say 'ZOINKS'!!!
Thank you for popping by... and if you want to check out the challenge and the DT examples head here.
Posted by Kerri at 11:39 PM

Kerri
Australia
I'm so lucky to be the mum of two gorgeous boys, Evan and Royce. I LOVE scrapbooking my boys, my family and our lives. I also make the occasional card... oh, and have a very understanding husband too ;-)