52 weeks to simplify your life

I was catching up on a few blogs this morning when I came accross Home Life Simplified.  Here there is a challenge just started up... 52 weeks to simplify your life. 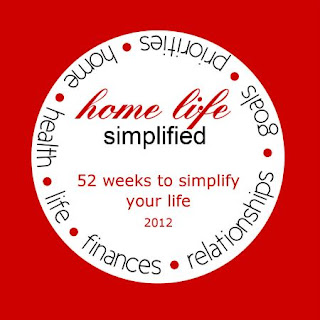 Now I don't think my life is particularly complicated, nor do I see myself as a negative person (anymore).  Scrapbooking has been a large part in helping me see the positives in my life and will always play a role in keeping me positive.  This challenge I think will compliment my crafting well and perhaps keep me on track when I am too busy or tired to do any scrapbooking.  It is up to Week 2, so I thought I might do Week 1 today and then in a day or so look at Week 2.  Then I will be up to date :-)

Week #1 Challenge: Create a list of everything that went “right” in 2011

I think 2011 was such a positive year for me and my family.  Darren and I seemed to be on the same page most of the year.  We had a few BIG barneys, but we seem to be able to talk through them better and listen to what the other person is saying a better too.  I think we both agree too that for a marriage to work both of us have to work at it and both of us need to make comprimises and sacrifices for the marriage and our relationship.  Not everyone agrees with me on this one... but Darren does so that's the main thing.  Towards the beginning of the year Darren was not a happy chappy.  He was not happy in his work place and felt he was being taken advantage of.  He would bring it home and it did not make for a happy homelife.  We eventually worked things out (after a massive argument) and he really did make a concious effort not to be unhappy at home, just because he was at work.  I am so proud of him for that, because I know how hard it is to do.  As the year went on his work finally signed him out (mature age apprenticeship) and he seemed to be much more content with work... at least he was being paid for what he was doing and had been doing for pretty much his entire apprenticeship.  This post is becoming rather long so I might just do the rest in point form
Well I better stop now.  But overall, so many things went right in 2011... here's hoping 2012 is just as great :-)
Posted by Kerri at 10:00 AM

Kerri
Australia
I'm so lucky to be the mum of two gorgeous boys, Evan and Royce. I LOVE scrapbooking my boys, my family and our lives. I also make the occasional card... oh, and have a very understanding husband too ;-)